Analysis of the top WordPress sites provides us with insight into the technologies and security posture of these high traffic properties. With the popularity of WordPress well understood, it is interesting to dig into the statistics and its usage within high traffic sites.

Poor security patching is a problem across all aspects of information technology. WordPress administrators are not the only ones struggling to keep things patched; in May 2019, the Baltimore city council servers were taken out in a ransomware attack. Even the phone in your pocket needs to be patched, with reports estimating that over a billion Android phones are missing security patches.

Automattic and WordPress have worked hard to make keeping things updated a smooth and easy process. When your software runs on 30% of the world's websites, patch management is important.

Keep in mind that for many WordPress sites, there is no full-time IT administrator. Almost anyone can get a WordPress site running. It's the ongoing patching and management many struggle with, which has led to growth in Managed WordPress hosting and services.

The methodology used to determine the underlying technology of web sites is to search for specific strings within the HTML, or the HTTP Headers provided by the web server. For WordPress, our process is a simple matter of downloading the headers and page source from all sites in the Alexa top 1 million sites. The resulting content was then searched for /wp-json/, /wp-includes/ or /wp-content/ indicating a WordPress powered site.

No guarantee is made to the accuracy of this data. The accuracy comes down to what we found in the source.

Here, we compare WordPress against its rival content management systems. It is clear to see WordPress is well out in front in 2019. 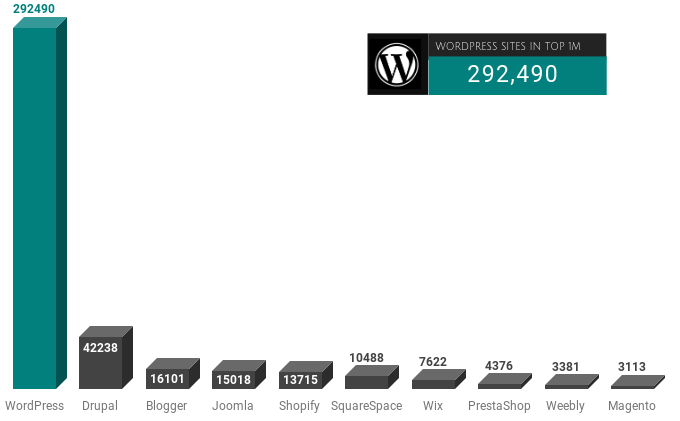 The popularity of WordPress gets quoted in everything from marketing materials to security incident reports. It is nice to see that the often quoted 30% figure is close even when counting the worlds highest traffic sites.

In the following chart, the total number for the web server technology is the focus. 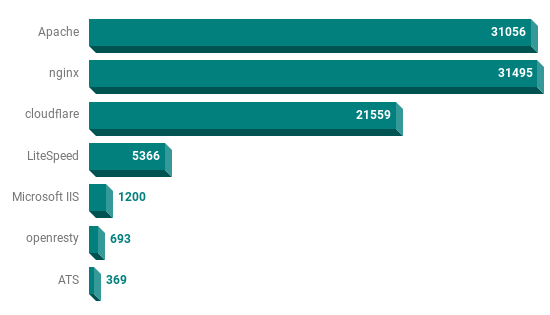 Keep in mind the front-end servers powering Cloudflare are Nginx based, and the growing openresty is also built on Nginx. Putting Nginx well out in front as the technology of choice serving the page to the browser. No doubt one of the reasons it was recently acquired by F5 Networks.

More than a handful of sites are running on Microsoft based IIS servers (1275). Included in this number are WordPress powered Microsoft Corporation properties such as Visual Studio.

A closer look at the Cloudflare statistics

Cloudflare continues to be very popular among WordPress administrators. 21.6% of the world's top 100K WordPress sites being served by Cloudflare on front end.

In this breakdown of the WordPress sites being served by cloudflare sites, we can see Cloudflare has grown by a couple of percent since our last analysis performed in 2017.

In the HTTP Header responses, we found the PHP version leaking in 28729 sites (28.7%) of the top 100'000. This was found in the X-Powered-By header or in the extended Apache Server Header. The end of life chart shows the percentage of sites within the 28.7% where the version was leaked.

Keep in mind that anything before PHP/7.1 is End of Life and not supported at all from the PHP project - even for critical security patches. 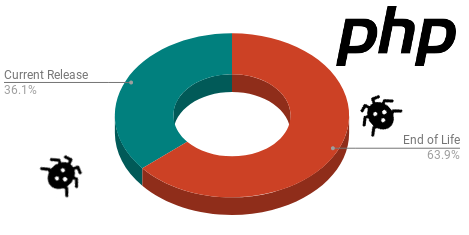 Looking into the WordPress version goes hand in hand with understanding the security posture of a site. Since the release of WordPress 3.7, automatic updates have been available for WordPress installations.

There are different ways to determine the version Check out our guide on Attacking WordPress Sitestest of a WordPress installation. For simplicity, only sites with the default Meta Generator banner are included in this break down of versions found. The default generator tag was found on 60009 of the top 100K WordPress sites. 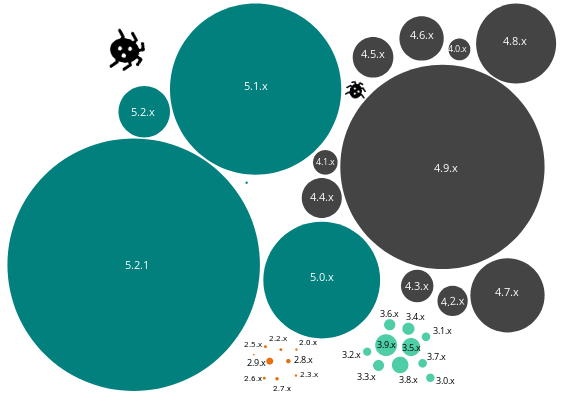 Quite a spread of versions can be seen! Those WordPress 2.x sites really do exist (WordPress 3.0 was released June 2010). There are currently 527 sites running 2.x and 616 sites running WordPress 3.x. This is about 15% less than 2017, so thankfully there are no new 2.x or 3.x installations!

Only 37.2% of these high traffic sites are running the latest version (2 weeks after release). 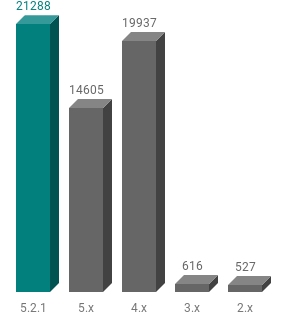 Crunching the numbers for the hosting of the WordPress sites, we simply resolved the IP address of the site. From the IP address, the network block owner was determined by running a simple ASN lookup. 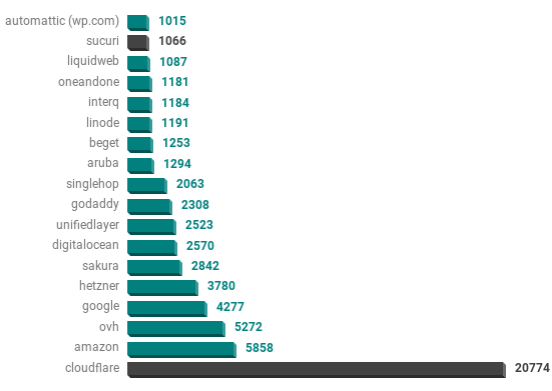 While the ASN's listed above show the locations of the sites within network blocks, there are also managed WordPress hosting providers whose services sit within some of these ASN's.

For example, the statistics for the Google ASN include the managed hosting provider Kinsta who utilizes Google Cloud for their services.

The data for these managed hosting providers has been pulled from HTTP headers, where clues exist in the server header or other custom headers. 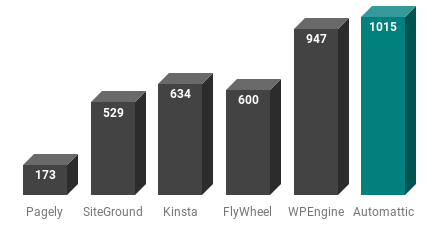 Everyone loves a good map. Utilizing the Maxmind GeoLite data the IP address locations were plotted against the list of 100'000 top WordPress sites.

As you can see, either a few sites are running on submarines in the Indian Ocean or, the IP Geolocation data is not 100% accurate. The general distribution of sites around the world is interesting, with expected clusters in the data centres within the USA and Europe. 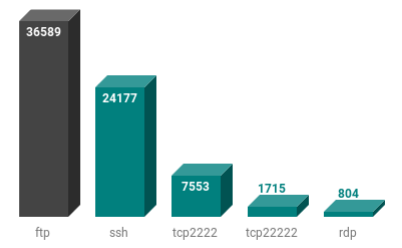 Are 36% of the top 100000 WordPress sites updating files using the unencrypted FTP protocol? Let's hope not. It is, of course, possible to use FTP over TLS/SSL, and this can be configured to work over port 21. Let's hope all those high value sites are using encrypted communication.

The rollout of IPv6 continues to crawl at a slow pace in most parts of the world. This is evident by the fact only 23.6% of the world's highest traffic WordPress installation have IPv6 enabled on server.

Google has statistics indicating they are seeing 29% of traffic being IPv6 globally. Maybe its time that web site owners jumped on the IPv6 wagon.

Analysis of WordPress plugins is limited to those that are detectable through passive analysis. In this instance, passive analysis is through examination of a regular web request and parsing the HTML and HTTP headers. More aggressive plugin detection can be achieved through brute-forcing plugin paths. Check out our guide on Attacking WordPress Sites However, this generates thousands of web requests and is only used by malicious actors and vulnerability scanning tools.

When it comes to improving the SEO of a WordPress site, there are two plugins that come to mind;

The nice thing about these plugins is they put a comment in the HTML source, allowing it to be identified. Recently, a new contender has entered the scene - SEO Framework. According to the stats, it has plenty of ground to cover to catch up.

Compared to 2017, Yoast SEO has really hit the accelerator now with 82% of the install base (of sites running an SEO plugin).

We can see that of the 37205 sites running Yoast, 5958 of these are running the Yoast Premium Plugin. That's 6% of the top 100K WordPress sites on Yoast Premium. Well done guys. 🙂

Identification was performed by checking for the plugins default comment. Of course it is possible that some sites have removed the comment.

The numbers become a bit rougher when determining the plugins in use. Unless the plugin has a default comment in the code, such as the SEO plugins and caching plugins, it gets a bit harder to determine plugins in use.

Many plugins load resources from the plugin folder (css or js), and this is the best way to identify plugins used passively.

So to determine the Top 25 plugins listed below, the HTML was searched for /wp-content/plugins/$plugin/. Then the plugin names were extracted simply using the path. An additional caveat: it is now common for javascript and css to be minified to improve site performance. If minified code is in use, this method of identifying plugins no longer works.

Using a similar methodology as the above plugin identification, we were able to identify the WordPress theme in use. Searching for the path /wp-content/themes/$theme/ in HTML and counting the most common occurrences. Many sites will use custom themes and have changed the path, however, identification of the most common should be fairly accurate using the large sample size. 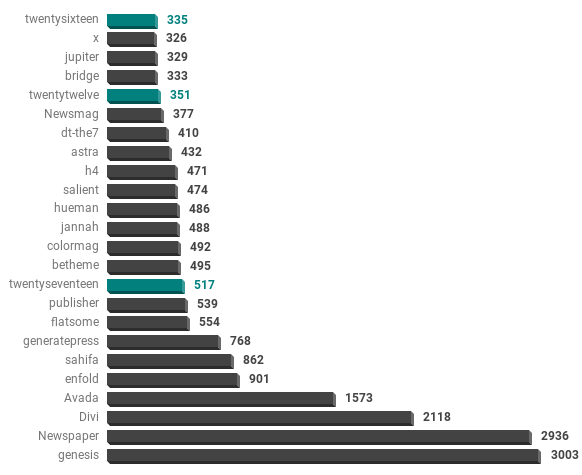 It is interesting to note that even the default themes (twentysixteen, twentyseventeen) that ship with WordPress make an appearance in the list. Showing that a flashy theme does not make the site, content matters.

Where's your site in the list?
Download full list of 100K WordPress Sites in .csv
Format of the csv file is comma separated with columns $rank,$alexarank,$site.