In this brief analysis I look at whether plugin security updates are being applied to the most popular WordPress based sites.

Everyone knows WordPress is an incredibly popular platform for not only traditional blogs but also increasingly as a full blown content management system (CMS). This popularity combined with a wide attack surface makes it a popular target for malicious attackers. The wide attack suface is due to the thousands of plugins, themes and custom code. 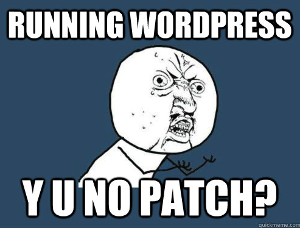 Background on the Vulnerabilities

W3 Total Cache and WP Super Cache two of the WordPress communities most popular plugins were found to have a code execution vulnerability. An exploit that enables code execution is about as bad as it gets. New releases of the plugins were released on the 18th of April.

Six weeks after the release of the new plugins I dumped the HTTP Headers of the Internet's 100'000 most popular websites to get an understanding of how quickly web site administrators are applying critical web application patches.

A typical HTTP Header response from a site running WordPress and W3 Total Cache can be seen here. Notice the X-Powered-By Header, and the version of W3 Total Cache (0.9.2.4). Oops! We found a vulnerable site!

In a word its a massive FAIL. These web sites are the most highly trafficked in the world and only 44.7% have upgraded W3 Total Cache to the latest version. 724 websites are currently still vulnerable with code execution possible.

The WP Super Cache Header does not reveal the version number however it is likely that there is a similar percentage of vulnerable sites running that caching plugin.

Guides for securing WordPress are plentiful and patching is only part of that process. Keep in mind that managing a secure WordPress installation is an on-going process, the system needs to be maintained and updates applied as soon as possible after release.

When applying updates to your WordPress installation be sure to cover the WordPress Core, all Plugins and the Themes. As seen in the Tim Thumb exploits, even themes can be a point of weakness.

One of the most surprising things about these results is the lack of security patch management in the top WordPress sites. It is to be expected that with literally millions of WordPress installations, finding vulnerable systems would be not hard, however the fact that there does not appear to be security patch management processes in place for even the high traffic sites is quite astonishing.