As of December 2018 PHP 5 and 7.0 became End of Life. It is now July 2019 and up to 74% of PHP powered sites in the top 1 million are running software that is End of Life. This means there is no support and more importantly if new vulnerabilities are discovered, there will be no security fixes released.

Upgrades do take work and major updates can take even more work. People are busy and the reluctance for patching when things are just working is understandable. However, when things go End of Life, there are no more valid reasons to not upgrade. In fact, with the latest releases of PHP there are a number of benefits to upgrading including a significant increase in site speed.

Warning: For those planning to upgrade, being a major version change from 5 to 7 a number of functions were deprecated. Ensure thorough testing is performed so the upgrade process is a smooth one.

The following data is based on sites that reveal the PHP version in the HTTP headers.

The number of sites running unsupported PHP is staggering. Especially considering these are among the highest traffic sites in the world. If a serious security vulnerability were to be discovered in PHP core or a module, these sites would have no way to patch and get protected.

Just show me the Stats!

The number of sites that leak the PHP version in the headers is just over 20% of the Top 1 Million sites.

This is where we get the figure of 74% of sites running PHP that is currently End of Life (unsupported). 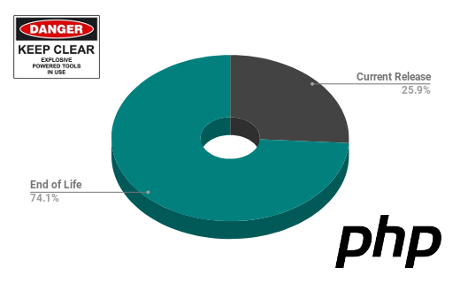 WordPress will require a minimum PHP version of 7 by the end of the year. This matters because WordPress runs close to 30% of all websites accounting for a large percentage of PHP powered sites.

According to statistics from wordpress.org 37.1% are running End of Life PHP. There is however no detail as to how the version was determined.

Newer versions of PHP do hide the version by default through the expose_php Off directive in the php.ini file, so in the overall PHP statistics we would expect the percentage to be better than the 74% shown in the data we have.

Distributions such as Red Hat, Ubuntu, and Debian can provide security patching to packaged PHP even if the version is no longer supported through the official PHP project. An example of this is ongoing support provided as part of the Ubuntu LTS (long term support) releases. Distribution packaged PHP reveals the distribution in the X-Powered-By and Server: headers.

Checking for these Linux distributions shows 25532 sites are using the distributions packaging (this does not verify that these are all supported but some would be). In the chart below you can see the versions with a number using a distribution package for the PHP software.

At the time of the article there are currently 599 PHP vulnerabilties with CVE's. The chart below shows number of PHP vulnerabilities discovered with a CVE score of 6 or higher by month. 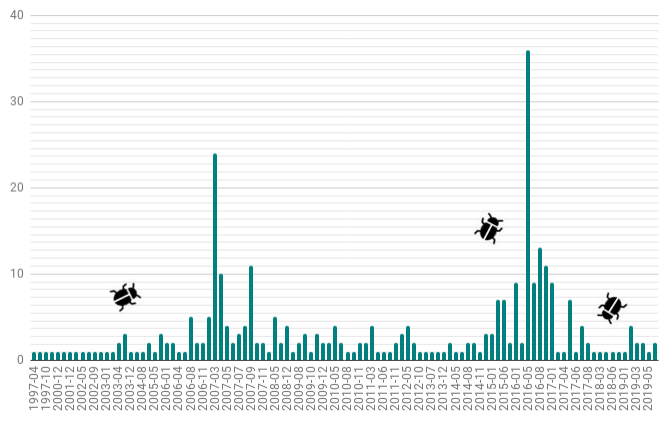 As can be seen over the years there has been a steady stream of vulnerabilities discovered. Of course this is the case in any popular and complex piece of software, whether it is commercial or open source software. This is here as simply another reminder that it is time to upgrade your PHP to a current release.

For a quick comparison against a very different software environment we examined Microsoft IIS server versions. The IIS web server version aligns closely with the Windows Server releases as can be seen in the table below.

The statistics are based on Microsoft IIS versions found in our survey of the Alexa top 1 million sites.

Microsoft IIS 7.5 or earlier versions accounts for 30.3% of sites. 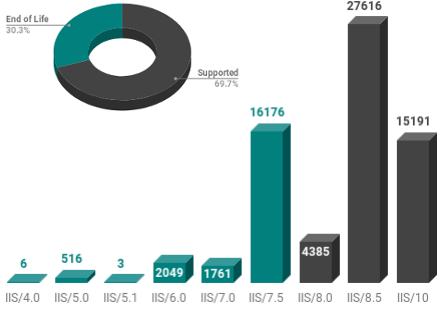 Even if we take into account the caveats and accept that the number would be lower than 74% across all PHP based sites, it is clear that a significant number of sites do need to upgrade. Site administrators need to get to work and fix this issue now. A new vulnerability could appear any day, and if you are not running a support version then that will be a bad day.

Knowing your vulnerability exposure and what services are listening on your network is the first step in keeping your organisation secure. Our service simplifies that first step with hosted online vulnerability scanners. Try it out today. Immediate access is available with a full refund available within 7 days.